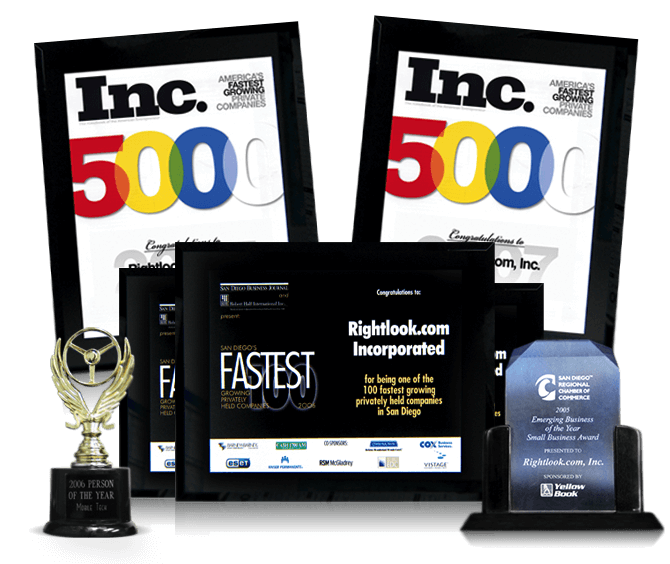 Below are the major awards that Righltook.com has earned in recent years:

Rightlook.com was ranked among the 5,000 fastest growing private companies in America for the 2nd year in a row. The Inc 5000 list, compiled and published by Inc.com, an extension of Inc. Magazine, ranks companies based on revenue growth from 2004 to 2007. Rightlook.com realized a growth of 87% during that time. Inc recognized Rightlook.com’s launch of Rightlook Creative, the marketing arm of the company that provides graphic design and creative services to small and medium sized businesses, as a noteworthy aspect of the company.

Joe Babbey, Vice President of Sales for Rightlook.com summed up his feeling about the award. “We are so honored to have made this prestigious list for a second year in a row. Being recognized nationally is really motivating to me and my department, and the whole company. It keeps us pressing on to do bigger and better things.”

The Inc. 5,000 is an extension of Inc. magazine’s annual Inc. 500 list. Taken as a whole, these companies represent the backbone of the U.S. economy. “The Inc. 5,000 provides the most comprehensive look ever at the most important part of the economy – the entrepreneurial part,” said Inc. 5,000 Project Manager Jim Melloan.

The Inc. 5,000 list was made public on August 23, 2007. Rightlook.com President Stephen Powers commented on the honor. “Rightlook.com has received several awards and quite a bit of recognition in the San Diego business community, but this is the first-ever national recognition of our growth,” said Powers. “It’s really exciting to be listed with so many successful businesses from all over the country. We’re definitely in good company.”

Once again Rightlook.com was honored to be included on the San Diego Business Journal’s annual list of the 100 fastest growing privately-held companies in San Diego. Rightlook.com has earned this prestigious honor for the past 4 years, and hopes to continue to be among the companies to watch in the San Diego business community. The awards were presented at a reception at the Westgate Hotel in downtown San Diego on September 20, 2007. Six Rightlook.com executives and employees were in attendance.

Stephen Powers, President and Founder of Rightlook.com, was named Detailing Person of the Year for 2006 by Mobile Tech News. Mobile Tech’s Person of the Year honorees were selected based on their significant contributions to the automotive reconditioning industry in the areas of detailing, paintless dent repair, interior restoration, paint restoration, windshield repair and automotive accessories. Awards were presented at the Mobile Tech Expo in Orlando, Florida on January 14th and 15th, 2006.

Mr. Powers stated, “It is an honor to be recognized for my contributions to the auto reconditioning industry and the field of detailing in particular. This is an exciting industry and I am proud to be a part of it.”

Rightlook.com, Inc. was honored once again as one of San Diego’s Fastest 100 Growing Privately Held Companies. The list is published annually by the San Diego Business Journal, and 2006 marked Rightlook.com’s 3rd year in a row to receive the prestigious honor.

The 2006 List of Fastest 100 Growing Private Companies in San Diego includes 100 companies who have experienced noteworthy growth in both revenue and employee size from 2003 to 2005. The average growth rate for the firms listed was an impressive 165%. The companies honored generated over $12.1 billion in 2005 revenues and employ over 13,625 San Diegans. The companies on the list represent diverse industries, including technology, biotech, staffing and financial services. Once again, Rightlook.com was the only business from the automotive industry to be honored on the list.

In a letter published in the September 25, 2006 edition of the Fastest 100, Armon Mills, President and Publisher of the San Diego Business Journal, stated, “These winners represent the best of show in our fast moving and always challenging economy… As diverse as they might be, what’s common to all 100 is the entrepreneurial spirit that compels each to succeed.”

Stephen Powers, President and Founder of Rightlook.com, accepted the prestigious award at a reception at the San Diego Marriott Hotel and Marina in downtown San Diego on September 21, 2006. As always, the list was kept a secret prior to the event, making each company’s representatives anxiously wait to find out how their company ranked. After hors d’oeuvres and entertainment, the list was revealed. Rightlook.com ranked as #43 this year, holding its place in the Top 50 for a 3rd straight year. Rightlook.com ranked as #12 in 2004 and #23 in 2005. President Stephen Powers commented on the growth. “It’s often difficult for young companies to sustain big growth year after year. The fact that Rightlook.com has consistently grown since we began in 1998 is something I’m really proud of.”

Rightlook.com was recognized as San Diego’s Emerging Business of the Year for 2005 at the Small Business Awards Luncheon presented by the San Diego Regional Chamber of Commerce. The Chamber’s annual Small Business Awards, presented on May 19, 2005 in conjunction with the U.S. Small Business Administration, pay tribute to successful, growing companies throughout San Diego County who are bringing innovative products and services to the marketplace and distinguishing themselves in their industries.

The prestigious award was presented at a luncheon attended by over 1,000 people at the San Diego Marriott Hotel and Marina in downtown San Diego. Keynote speaker Hector V. Barreto, Administrator of the U.S. Small Business Administration, spoke of the huge impact that small businesses play in strengthening the regional economy and providing new jobs. Stephen Powers, President and Founder of Rightlook.com, proudly accepted the award on behalf of the entire company.

Ten members of the Rightlook.com team were present at the luncheon to celebrate. The company’s Creative Director Jesse Garcia-Arellano stated, “It’s great to work for a company that is recognized for its achievements by such a large and thriving small business community. This is just one of many great things to come for Rightlook.com.”

Rightlook.com, leader in the automotive reconditioning industry, was named one of the Fastest 100 Growing Privately Held Companies by San Diego Business Journal for the second year in a row. Rightlook.com was ranked as number 23 on the 2005 list of San Diego’s fast growing companies, with a growth of 105% from 2002 to 2004.

The San Diego Business Journal holds an awards ceremony each year to honor the Fastest 100 Growing Companies in San Diego. Companies are chosen based on documented growth both in revenue and in employee size. Rightlook.com’s growth in revenue from 2002 to 2004 was 105%. Rightlook.com was the only business from the automotive industry to be included on the list.

Armon Mills, President and Publisher of the San Diego Business Journal, stated, “Congratulations to each you for making our List of the 100 Fastest-Growing Privately Held Companies. Achieving a spot on this list is impressive for any company. May your outstanding success continue to grow in the future.”

Stephen Powers, President and Founder of Rightlook.com, accepted the prestigious award at a reception at the Westgate Hotel in downtown San Diego on September 21, 2005. “We are so excited to be included on this prestigious list again this year. It’s great to be recognized as an integral part of the San Diego business community,” said Powers.

Rightlook.com executives Joe Babbey and Catherine Henry Piepenbrink were also in attendance at the awards ceremony and reception. “It is such an honor to be listed among these great local companies. Rightlook.com has experienced tremendous growth over the last few years, and I’m thankful to be a part of a company that is achieving great things,” said Babbey, Vice President of Sales for Rightlook.com.

The 2004 List of the Fastest 100 Growing Private Companies in San Diego, published by the San Diego Business Journal, was the first of its kind. Rightlook.com was the only business from the automotive industry to make it on the list, showing an impressive 163% growth from 2001 to 2003.

Armon Mills, President and Publisher of the San Diego Business Journal, stated, “We hope we are on the cusp of what is to become a long-standing tradition for our paper and our community – honoring these outstanding 100 firms and celebrating the entrepreneurial spirit of our region.”

Stephen Powers, President and Founder of Rightlook.com, accepted the prestigious award at a reception at the Westgate Hotel in downtown San Diego on September 29, 2004. “We were thrilled to make the list, and even more excited to learn that we were #12! It’s great to see our hard work pay off and be recognized as an integral part of the San Diego business community,” said Powers.

Rightlook.com executives Joe Babbey and Catherine Henry Piepenbrink were also in attendance at the reception. “It’s so exciting to be a part of such dynamic growth. Sometimes we lose sight of all the great things that we’re doing here, but being recognized at the event and seeing how we stack up against other San Diego companies was really exciting and motivating for me,” said Piepenbrink, Vice President of Operations for Rightlook.com.